The alarm clock pierced the air with its shrill bleeping at 3.45am this morning, precisely three and a half hours after we’d gone to bed. This rude awakening was necessary so that we could take a trip on what’s known locally as El Chepe – Mexico’s Copper Canyon railway – and one of the country’s few passenger train services. This train takes a route along the Barranca del Cobre, an area of 20 canyons that’s four times larger than the Grand Canyon. At one point, despite being just 500 metres above sea level, it reaches a depth of 1879 metres.

Our nascent train geekery (don’t worry, you won’t catch us in stained anoraks scribbling down the numbers of locos at the end of the platform at Kings Cross) began on a trip to Japan about five years ago when we visited for a friend’s wedding. I defy anyone not to feel even the tiniest bit excited when they see a gleaming bullet train slide into the station exactly on time, stopping in front of you in exactly the place marked on your ticket. The Virgin Pendolino from London to Crewe this was  not.

When we went on our honeymoon to Argentina, we’d been disappointed to have missed journeying on one of the country’s most spectacular train trips El Tren a las Nubes (the train to the clouds) by just a few days, due to it not running in the rainy season, so we were determined this time round to indulge in a few train trips. Train travel is rare in this part of the world, as we’d discovered from our research on the excellent Man in Seat 61 blog, most train lines having suffered from massive under-investment and the few there are used to transport goods rather than people. Bus travel, it seems, is the way to go, and while they’re certainly a lot plusher than we’re used to in the UK, there’s nothing quite like being smoothly whisked along by a train.

So when the opportunity came to travel on El Chepe, we decided to go for it, even though it far surpassed our budget – see my earlier post. To get our tickets, we had to be at the station in Los Mochis, the town we had arrived in late the night before after a ferry journey from Baja California, before 5am when the ticket office opened, and our friendly taxi driver was due at our hotel at 4.30.

When we arrived, it was apparent that people take getting tickets for this train pretty seriously. The station waiting room was already full of people who looked like they’d been camping out overnight, Wimbledon-style. The benches were full of sleepy looking Mexicans loaded up with blankets, pillows and their luggage. We joined the queue or the ticket desk and settled in for  the long wait. At ten to six, we finally got to the front of the queue and tickets in hand, stumbled sleepily along the still-dark platform, rucksacks on our back, to our carriage.

A very smartly dressed guard (well, we were travelling first class after all), wearing a peaked cap and waistcoat, ushered us to our seats and confirmed that we had got seats on the ‘good’ side of the train, i.e., the ones on the right hand side where the best views are to be had. The carriage’s air conditioning system was set to the ‘arctic’ setting favoured by most Mexicans so we abandoned all hope of getting some extra sleep and settled in for the journey.

Our carriage – most of our fellow passengers were slumped down in their seats, half asleep at this point

Shortly after we set off, our guard came up the carriage asking who wanted breakfast and as we had’t had time to buy any food for the journey, we decided to take advantage. After a confusingly long, caffeine-deprived wait (there was obviously a system that hadn’t been explained to us; we’re getting used to this!) the guard called our carriage to the dining car where we had the option of a Mexican breakfast (scrambled eggs with meat, beans, fried potatoes and tortillas) or a more miserly bowl of cereal or fruit. Naturally, we opted for the full Mexican, as we’d already spotted that the train sold precious little else other than crisps and soft drinks, and we tucked into a pretty decent plate of freshly cooked food as the countryside rattled by. Luckily, the coffee was free-flowing so by the time we got back to our seats we’d definitely perked up.

One of the most enjoyable parts of the journey was the complete lack of regard for passengers’ health and safety. Hanging  out in the vestibules between carriages and sticking your head dangerously far out of the window was completely the norm. For the next few hours, we took in some stunning scenery as the train rattled on its way higher and higher into the mountains. Magnificent canyons, waterfalls and lush greenery were a welcome change after the desert-like vistas of Baja.

Choo choo, El Chepe sets out on its journey 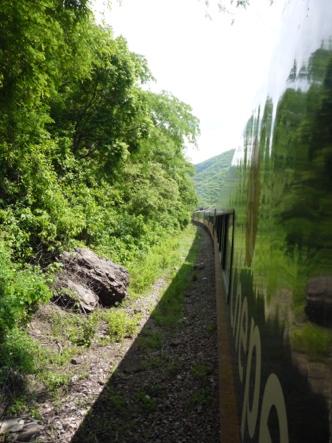 One of the canyons we passed by 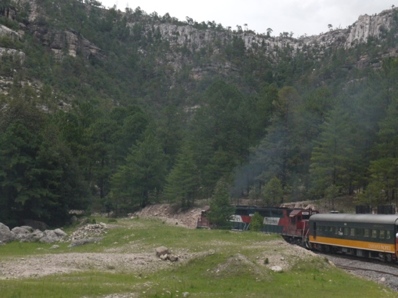 Climbing slowly up into the mountains

The full journey, from Los Mochis to Chihuahua covers 653km, goes through 87 tunnels and over 36 bridges and takes around 15 hours. Rather than go the whole way, on the advice of the Lonely Planet which thankfully turned out to be right on this occasion, we broke our journey at the mountain town of Creel, nestled 2338 metres above sea level in the middle of pine forested hills, where we arrived two hours late, at 5.30 that afternoon, exhausted and ready for bed…