Warning: This post contains explicit images of extreme breakfasts, which some readers may be offended by.

Whilst in Mexico Prawns for Breakfast was able to bring you some of our favourite breakfasts from the insane range available to the intrepid traveller. And we enjoyed the task so much that we decided to make it an occasional series from many of the countries we visit on our trip, thus compiling possibly the most comprehensive library of Latin American breakfast and brunch plates ever committed to the worldly web. And we’ll say right off the bat that the selection offered is in no way an accurate reflection of traditional breakfasts cooked in each country: they’re just the ones we got the most crazy about. In this post, we start to take you through some of our fave Guatemalan breakfasts. Hope you enjoy them as much as we did.

The first one is actually slated as the ‘classic’ Guatemalan breakfast on most menus, but so far we have never had it served to us by our homestay family (of which more soon). We tried it at a lovely airy restaurant called Las Gardenias overlooking the main road through El Ramate, a village on the banks of the Penten Itza lake. (Clare ordered their version of huevos rancheros.) 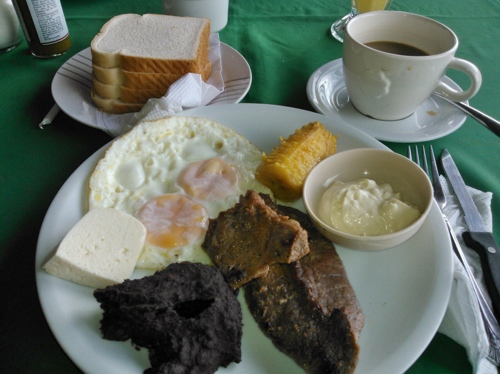 Straight away there’s one glaringly non-traditional thing about this image, and that’s the big ‘ol pile of sliced white bread in the background. Guatemalan families would only serve tortillas, piping hot from the griddle, for a dish like this (although you may get some pan with a bowl of avena – porridge oats). And the other thing that may not be so usual is the presence of fried eggs – most likely, they would come scrambled if at all: many Guatemalans would only have eggs for their tea. The other elements were slightly strange on their own but actually combined fantastically well. Clockwise from centre you’ve got a hunk of steak (which was a hearty centrepiece but unfortunately quite tough and dry, possibly left over from the previous night’s service), the ever-present frijoles (but now more mushed up, darker and a lot tastier than the Mexican version), a wedge of salty, white cheese (a bit like feta), a chuck of moreishly sweet plantain (such a good breakfast ingredient) and – most unusually – a bowl of sour cream. I think the cream was there as a counterpoint to the dryer parts of the breakfast, and it really did the trick with the steak. It was a properly hearty feast all in all, and we were completely sated by the end. We enjoyed it so much we missed saying buen viajes to our travelling companions at the time, Felix and Anna. Sorry guys.

From the sublime to the frankly ridiculous now, and a bizarre entry from Y Tu Piña Tambien cafe in Antigua. It was billed as the perfect hangover brunch for worked-over gringos, and you’ll quickly guess why: yup, it’s 50% ‘Hair of the Dog’: 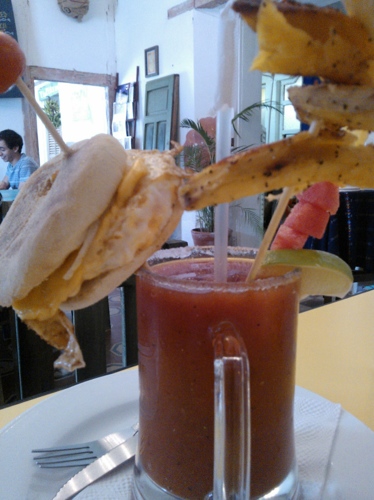 !Santa Maria! What can I say about this meal? Well, obviously it rocked. It was actually hard to capture all parts of it in one shot, and I can definitely say it’s the first breakfast I’ve ever eaten served in a glass. On the right, the mighty egg ‘n’ bacon muffin was the greasy backbone of this loco creation: you just know how good one of those bad boys is the morning after. So that’s your fats and salts sorted; then to the right stands a stick speared with sweet potato wedges for a spicy hit of extra carbs. My only complaint about the dish was that the fries were served cold. Behind this sits another stick of fresh fruit, and every good hangover cure needs a vit-fix, so I wasn’t complaining about that element, even if the watermelon didn’t go with the muffin and potato elements (but watermelon never goes with anything, now does it?), and finally you have Piña’s take on the classic Hair of the Dog cocktail, the Bloody Mary, but with their sister bar’s house mezcal sitting in for vodka. Even if the edible element of this dish was on the small side, the cocktail was ridiculously drinkable, and by the end of it all I was feeling tickety-boo, so hats off to the Pineapple crew for inventing this fun, new way to tackle the morning after.

Finally for now, I need to introduce you to the Elvis: this crazy creation is the brain-child of Cafe Atitlan, in San Pedro, on the lake of the same name where we are currently studying Spanish. In my humble opinion it’s the perfect Sunday brunch: 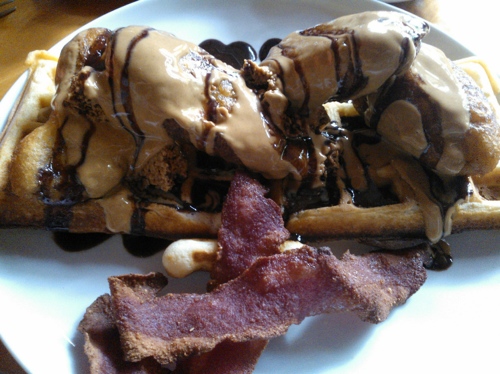 The King of Breakfasts

Ok, so we all know that Elvis was quite partial to fried banana and peanut butter sandwiches, so this is Cafe Atitlan’s homage   to the portly King of Rock. It comprises two giant waffles (I originally got into waffles for breakfasts in LA and haven’t looked back since), decked with four chunky torpedoes of battered plantain, and smothered in chocolate sauce and liquid PB. Oh and there’s some crispy bacon on the side for good measure. It was a truly epic plate worthy of its namesake, and definitely not for the faint-hearted – but was undeniably pleasurable to consume, all washed down with a cup of the Cafe’s fantastic cafe con leche. The bacon served as a salty raft in a sea of artery-attacking delicious gloop – my only quibble was that it was crisped to the outer limits of its purpose. But overall, a serious contender for the prestigious award of My Best Breakfast Ever. Uh-huh.

Next time around, we go on the hunt for the sausagey special El Chapin, and Jovian gets up close and personal with the biggest Full English in the world (probably). Stay tuned, PFB fans!