Some of the best food in the world starts with the letter ‘p’: fact. Prawns, naturally. Pulpo a Gallega. Pies. Pickled eggs (with a pint) and, of course, pasta and pizza. It just so happens that Finsbury Park, where we live in the UK, is home to possibly – no, definitely – the best pizzeria in London, Pappagone’s (I may have mentioned this wonderful restaurant here before, but if I haven’t I exhort any Londoners reading this or readers likely to visit soon to seek it out, potentially as a birthday treat: you will not be disappointed).

So naturally we were missing proper Italian fare, and when our homestay family in San Pedro put us on to Restaurante y Pizzeria de Alfredo, it equally sounded like an experience we didn’t want to miss. Indeed Alfredo’s is widely acclaimed locally as San Pedro’s best pizza and pasta restaurant, although it should be clarified that – unlike nearby Panajachel with its endless array of street shacks serving up crazy cheap pizza, there are only two Italian joints in San Pedro.  And school friends reported Mike’s Pizza to be heated up in a microwave. But everyone we spoke to assured us that Alfredo’s was in another league, and so after a number of failed attempts to eat there, we finally managed to get a reservation for early one Saturday evening. 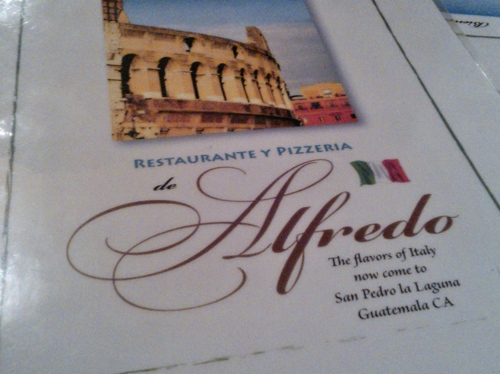 Alfredo’s is situated in a ramshackle yard, through a dilapidated gate on a tiny side-street off the main road between the two docks in San Pedro, which makes it one of the most out-of-the-way joints in this town of 14, 000 Guatemaltecas. It was easy enough to locate because it happened to be on the way through the backstreets of San Pedro to our school, and coming back after Salsa lessons one evening we heard the beguiling noise of large groups of locals and travellers getting into the Italian groove. As I say, it took more effort than we thought to get through the door than we imagined, mainly because – despite the fact that we are in the middle of the rainiest part of the low-season – the place is always booked up from the moment it opens at 6.00 in the evenings (and the first evening we hoped to et there, Alfredo’s wife had been taken sick and caused the whole establishment to be shut).

The feeling when we finally arrived and were sat at our rickety reserved table was one-part Pop-up Pizzeria to two-parts secret Supper Club. Alfredo hosts only four tables, and all of them are in el aire libre. The actual restaurant building comprises a small waiting area at the entrance, a kitchen not bigger than a bedroom with three stoves and a small fridge to the left, and a electric pizza oven (no fancy wood-burning brick construction here) in the back kitchen. Staff and customers share just one toilet, which also appears to function as a shower room for the family home. Bocca de Lupo this was not. We had the sense of being in the presence of something mighty yet incredibly humble, like having the Queen round for tea. This feeling was heightened by reading Alfredo’s blurb inside the laminated menu, explaining that he used to cook for the Spanish royal family and other top-shelf luminaries across Europe until (reading between the lines) he couldn’t hack the constant pressure to serve up award-winning Italian grub to toffee-nosed aristos any longer, and came out to the backwaters of Guatemala to cook for a bunch of undiscerning bums every night. 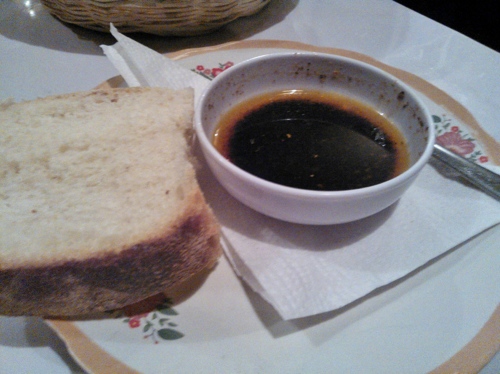 Keeping the wolves at bay

The wait for service was pretty long, but we put this down to the fact that the place is pretty much run single-handed by the affable and expansive chef himself, taking orders, preparing the bill, cooking all the pasta and gnocchi dishes and even bustling around the tiny kitchen to demonstrate the different sizes of pizzas to us. His wife created the pizzas on a wide table by the kitchen window in front of our table. A couple of somewhat depressed looking older women lumbered lugubriously from the kitchen to the garden with baskets of bread and carafes of house wine, not attempting to communicate in any language with the guests. The bread, accompanied by a rich and smoky chilli salsa, kept us going for 25 minutes or so, until our starter came out. It was worth the wait: 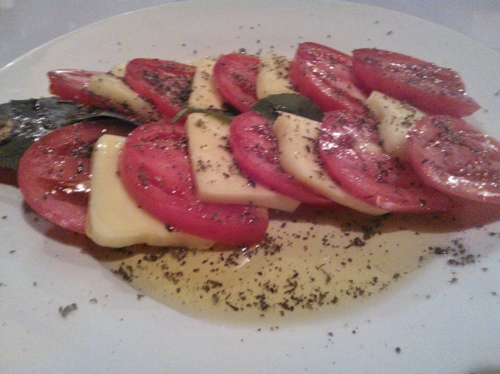 It was everything a good Italian salad should be: the simple, bold flavours of the holy trinity of fresh mozzarella, tomato and basil bathed luxuriously in a rich, nutty virgin olive oil. It was devoured reverently and speedily, but fortunately work had begun on our mighty Mixto pizza a while before, and it was not long before it reached our table in Roman opulence, looking radiant and smelling divine. 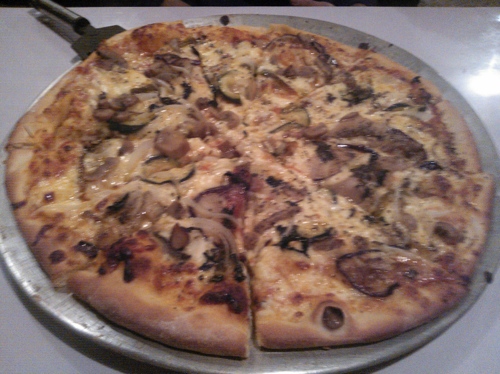 The first thing we realised about this dish was that it was vegetarian. Who knew that a ‘mixed’ pizza topping wouldn’t include some kind of Italian sliced meat (there was already a vegetarian-labelled alternative on the menu that we’d passed over)? Slicing into the magnificent creation we had some doubts, but these we quickly assuaged by our second realisation: that this was the best vegetarian pizza in the world. Ever. I cannot adequately convey how well the aubergine, mushroom and onion toppings melded together upon the crispy yet pliably baked dough beneath. Nor can I imagine how this result was achieved in a cheap electric oven. My photograph in the half-light of Alfredo’s kitchen does no justice to how it looked, smelt and tasted in the flesh. In the words of Homer J. Simpson, it was like there was a party in my mouth and everyone was invited. We were hooked. We wanted to try the pastas being plated up all the while just behind us. We had to come back.

And this was an unqualified mistake. Some experiences, like watching your favourite band play their best album, or eating just-caught sashimi for breakfast, are so undeniably spot-on that a repeat performance will always be a let-down. When we returned a week later, the wait to be served had extended unbearably past the half hour, bread and drinks had to be forcibly extracted from the kitchen, the silent waitresses were either blissfully unaware of our presence or too preoccupied by their Stygian thoughts to serve us. When they finally came, the Puttanesca and Salmone Noruego (Norwegian salmon) pastas were hastily prepared, woefully short on key ingredients such as, er, salmon, and devoid of the love and devotion that Alfredo’s wife had poured into her pizza previously. And to top it all, Alfredo himself tried to charge us for a litre of wine we never ordered; no-one appeared bothered to acknowledge the mistake, let alone apologise for it. 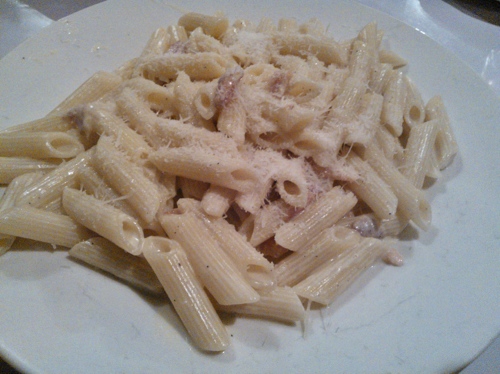 So this is the unvarnished PFB verdict on Alfredo’s: if you’re coming here and love pizza, go: it will be worth hunting this odd little establishment down. But plan your visit so you don’t turn up ravenously hungry, steer clear of the pastas, check your bill carefully, and think twice about a second spin.