Naturally, Prawns for Breakfast feels you should get the very best travel and food highlights from every Latin American country visited by its writers. No destination is too remote, no mode of transport too uncomfortable, no plate of mysterious meat too unidentifiable, that it cannot get a decent write-up on these pages. That, we know, is what keeps you crazy cats coming back for more.

Which is why we feel we need to offer a personal apology to the people of Costa Rica, aka the Rich Coast.

Rich indeed in natural resources, and wealthier still in relative economic terms to its Central American neighbours, we felt sure that we would agree with Tourism Minister Allen Flores‘ assessment that on entering Costa Rica we would “partake in a magical natural and cultural experience, within a relaxing and stable environment, and with people that are easy-going, warm, and friendly.”

We trusted our ever present Lonely Planet companion Central America on a Shoestring (2010 ed) when it declared it synonymous with paradise on earth, and confidently informed us that “the waves are prime, the beauty is staggering and the sluggish pace seductive” (p. 522). And it was equally hard to resist that seduction when we read the flamboyant opinion of the august Instituto Costarricense de Turismo that “Costa Rica offers a quality of life unparalleled in the Western Hemisphere”.

Quite clearly, this baby was going to blow the roof off the joint (in the parlance of our times).

But instead we checked out the price of a small pizza and a glass of wine in San Jose, panicked, and fled the next day for the Caribbean coast. We holed up in Puerto Viejo, supposedly a charming, laid-back town distilling the very essence of la pura vida (Costa Rica’s legendary simple way of life).

Unfortunately, everything was just as eye-wateringly expensive here as it was in the city, with the added attraction of wide eyed locals attempting to sell you a) badly printed Bob Marley T-shirts and b) badly cut cocaine. Tales of petty thefts from tourists abounded: a fellow traveller just had her entire bag swiped from the surf shack she was taking lessons at. We found a well equipped and sociable hostel, Pagalu, and spent most of our time cooking cheap pasta dishes in its capacious kitchen, chatting to a bunch of nice backpackery folk, such as Tiffany, a top lass from South Georgia travelling pretty much the same route as us, but on crutches. (You can – and should – check out her incredible story, A Tale of Two Legs, here.)

So we actually visited the ‘real’ Costa Rica three times in all. One was to the local supermarket, to stock up on all the things we would need to cook whilst we stayed in Puerto, so we wouldn’t need to eat at restaurants which cost the same as eating out on London. Unfortunately, the supermarkets were more expensive than, er, shopping for food in London. The second occasion was to the beach, as we were getting cabin fever after a few days at the hostel, and Tiffany really wanted to swim at the beach. So the three of us wandered down to nearby Playa Cocles, where we spotted a three-toed sloth doing what they do best (nothing). Here’s the somnolent feller: 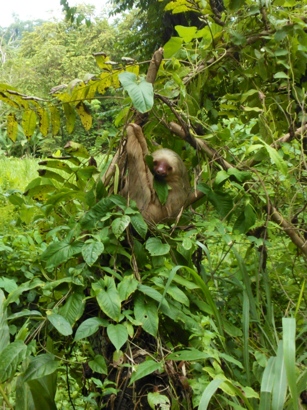 The last and final time we got out was just before we left the country, and checked out a coffee and brunch place called Bread and Chocolate, which had got Jovian’s juices going after hearing how good their Chicken and Waffles were (a dish he first tried in LA, and has become slightly obsessed about since). It was indeed an outstanding meal, so we are using it as a singular example of Costa Rican breakfasts and brunches, even though it is not a Costa Rican dish.

So: sorry, Costa Rica, lo siento and all. I guess we did you a big disservice there, and if you’re reading this Señor Flores (you’ve probably got PFB bookmarked, after all) we will happily come back again and do a better job, in return for a couple of business class flights to San Jose, and – oh, let’s say 7 million colons’ spending money. Fair enough, gov?