Prawns for Breakfast likes three things more than most in this life: a good mystery, a classic train ride, and a decent breakfast. Our ideal travel scenario would be solving a murder aboard the Trans-Siberian railway, over a leisurely breakfast in the restaurant car. But trains are scarce to non-existant in Central America, and for once, I am not going to be discussing breakfasts in this post. So a mysterious tale of murder, myths and missing gold it is. Are you sitting comfortably? Then I’ll begin.

Our tale began back in San Jose, Costa Rica, where at our hostel’s book exchange we’d picked up an intriguing title called The Lost and Found. It proported to be a collection of blog posts, diary entries and letters published by the co-owner of a hostel by the same name, situated high up in the cloud forests of Chiriqui, an hour out of Panama’s second city, David. The documents are alleged to concern the true story of six travellers – three young women and three single men – who were invited to run the hostel when the Canadian owners had to return home suddenly.

All the men are claimed to have died during a bizarre cult ritual that went horribly wrong, and all three women were never seen or heard of since. The hostel, an eco-lodge at the Fortuna Forest Reserve, serves as one of the three focal points for the investigation of these deaths and disappearances. A series of clues appended to the book allows curious backpackers to attempt to solve the mystery themselves by finding the location of the victims’ remains, either at each location in Panama, or online.

The lodge itself is pretty much the most remote and inaccessible hostel ever built; buried in dense jungle, it clings precariously to a mountain ridge enveloped by a thick curtain of clouds. It requires a killer 15 minute hike up steep hillside from the winding Bocas del Toro – David road to reach reception. There is no transport for your bags, and no lights to guide your way if you plan badly and arrive once the sun has set. Oh, and if you get there in one piece you are expected to meet Rocky – their pet Kinkajou – when he wakes at dusk. He’s tame because he was neutered before being rescued by the lodge, but he does have a habit of trying to bite guests’ noses off.

This mix of dangerous and downright insane ingredients is catnip for the adventure-seeking traveller, and we were instantly hooked. Add to this the fact that The Pieman’s farewell travel mix was also entitled ‘Lost & Found’, and it seemed highly appropriate to book into the lodge for a couple of nights on our way to Panama City. At Bocas del Toro we fired off an email to reserve a couple of bunks. Luckily we were at the tail end of low-season and there was still plenty of space. It was time to trek into the dark heart of Panama.

On the road to David

It was a good thing our bus driver had heard of the place, as the clouds had really started to roll in thick about three hours from the islands, and the hostel website’s description of the right spot to disembark was equally opaque. He had gruffly indicated that we were somewhere close to the turn-off, and we kept our eyes glued to the foggy roadside for the solitary sign we had been told would indicate our alighting point. Finally, Clare spotted it, and motioned for the bus to pull up. We strapped our backpacks on as tightly as possible for the impending hike to the lodge.

Found: The Lost and Found

The ascent was as perilous and enervating as we had been led to expect. It had just stopped raining, and the uneven stone path was extremely slippery: we nearly fell more than once but stumbled on doggedly. Periodic signage helpfully advised us that we were nowhere near the top. At least the cloud forest was crisp and cool in the late afternoon. 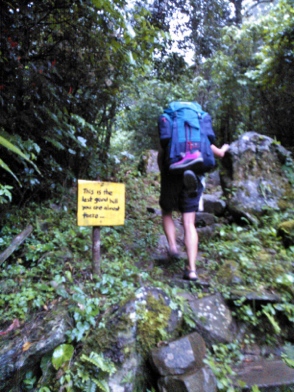 Must be getting near now

Finally, as the last of the day’s sunlight trickled weakly through the tree tops, we reached a clearing in the forest where the lodge was sited. We congratulated ourselves on completing the arduous climb in one piece, and staggered, exhausted into the symbol-adorned reception building. We can’t turn back / cuz it’s too late, as Jim Morrison once sang. 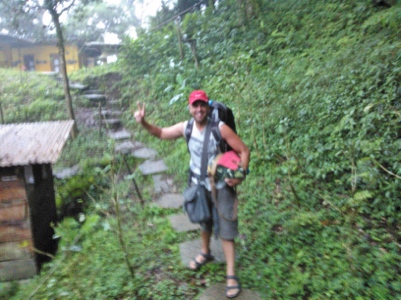 That night the bar – known for sessions of bacchanalian revelry – was closed, and that was probably a good thing. We donned ponchos provided by Nico, our friendly tour guide and host, knocked up a quick and tasty veggie curry with the ingredients available in the kitchen, and hunkered round a big table in the main building, swapping stories about the dark legends surrounding our new home. 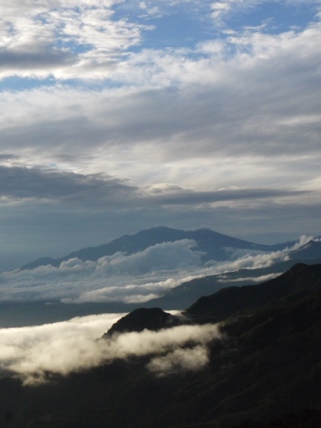 The view from the top

Natasha, a new volunteer at The Lost and Found, told us that Maria Concepcion – one of the tres lolitas at the centre of the story – had created a treasure hunt based on the legend of Osiris, an Egyptian god. (Osiris and Isis were worshipped by several cults who wanted to unlock the mystery of human resurrection.) On further investigation we found that the hunt would take several hours to complete and would let us explore many of the landmarks around the reserve, and that we would get free drinks at the bar that night if we completed the hunt. That was all the three of us needed to sign on the next morning.

The hunt began in a labyrinth and directed participants to solve riddles stashed along the forest trails and around the banks of the nearby river. Solving all the clues would enable us to locate ancient symbols and use them to decode some text from a portion of the book we had read, which told the tale of the lost gold of La Mina, a gold mine near David.

We must have spent a good thirty minutes in Maria’s jungle-clad labyrinth, figuring out how to reach the palm tree and all-important first clue in the centre, diving into numerous false paths and circling back on ourselves more than once. We eventually selected the right series of twists and turns to get to the heart of the maze. The clue felt like another dead end: 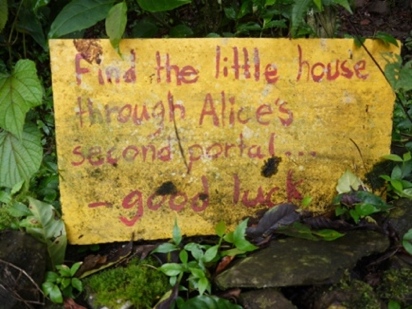 Eventually we worked out where we should be heading and followed the helter-skelter trail though the foreboding forest for another five hours, stopping only for water and snack breaks. The going was tough at times, especially as the location of many clues could only be reached by dropping down steep river banks, but we soon had the scent of our quarry. Roots are God’s ladders through the jungle; trailing vines His mobility assistance rails. A combination of perseverance, Haribo sweets and sheer bloody-mindedness helped us conquer both forest and river to solve all the clues.

Jove and Natasha break from swinging on vines

Clearly I am unable to give you more information about the hunt on these pages, for fear of spoiling the mystery for other Panamanian travellers reading. But after a well deserved hot shower on our return to the lodge, we re-grouped at the Alpine cabin-style bar to unlock the riddle of the lost gold and claim our free drink (which was selected by a throw of the die from six options of varying quality, rather unfairly I thought). It had been a tough physical and mental challenge, and we had got lost more than once. But now we were home dry, and had found gold.

Bar prize: to the winners go the free drinks