With Jovian’s latest culinary quest completed, we made tracks for Colombia’s capital, with a brief stop over along the way in Villa de Lleyva, another colonial town, but without the same level of chocolate box cuteness as Barichara. The best thing about Villa de Lleyva was without doubt its daily food market, but I’ll let Jovian talk about that in more detail in a separate post.

The first thing the traveller to Bogota notices is that it’s cold. The second thing is that it’s generally wet. The warmest day ever recorded in Bogota was apparently just 24 degrees and we spent most of our days there wrapped up in fleeces, coats and hats. Despite the cold, no buildings have central heating (we’re not sure why), so every night we were piling multiple blankets and duvets on to our bed just to keep out the chill. And then of course there was the rain.

A typical afternoon in Bogota

Every single afternoon – without fail – the heavens opened for about four hours of solid rain, flooding the streets (they don’t do appear to do drains either), and we’d arrive back at our hostel with soaked through clothes and shoes. After a couple so days of finding ourselves without adequate protection when the rain struck, we realised we needed to play the weather at its own game. Our new tourist tactic would be to spend the morning outdoors, and the afternoons checking out a museum or gallery, or just drinking hot chocolate in a chic cafe.

We put our new plan into action the next day and decided to check out Monserrate, a church and lookout point high on a hill overlooking the city. Rather than take the footpath, a 45 minute walk up a steep hill at lung-busting altitude (Bogota is 2,625 metres above sea level; Monsterate, 3,152), we took the altogether more relaxing cable car/funicular combo (the funicular carries visitors up, the cable car takes people down). Here’s Jovian looking very excited about going on the funicular: 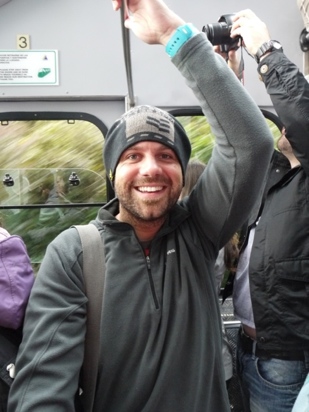 The church itself wasn’t particularly special but we got some amazing views of the city despite the ominous black clouds that had begun to gather. 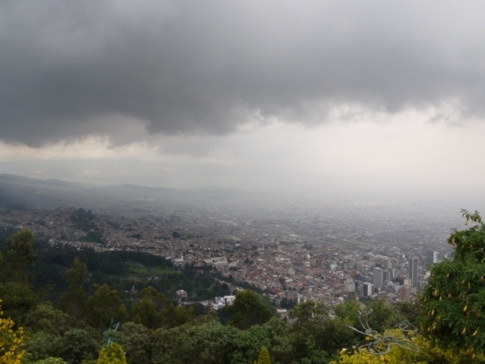 To Jovian’s delight, as well as the usual stalls selling tourist tat that we avoid at all costs, there was also a food market serving every type of local speciality, from grilled plantains stuffed with cheese (on the left of the picture below), to different types of giant meaty sausages (middle and top right), and sopa de ajiaco – a yummy soup made from chicken, corn, potatoes and avocado that we consumed many bowls of during our stay. 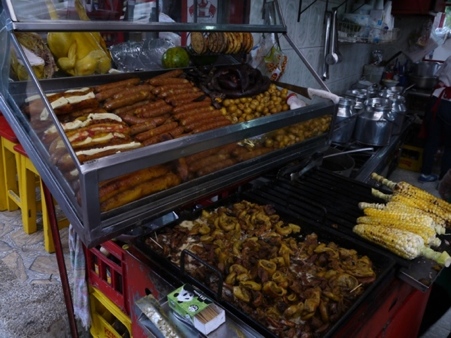 Unfortunately it was too early to be tucking into a hearty soup but we noticed one stall holder was also offering the Colombian morning snack of hot chocolate and a lump of hard white cheese. While we’d been enjoying cups of milky hot chocolate to keep out the cold, I wasn’t so sure about serving it with salty cheese. Naturally, Jovian had no such qualms about such an unlikely combination, and declared it acceptably weird enough to road test on this cold and foggy morning. I was happy to try the chocolate on its own, but wasn’t going anywhere near the cheese combo. 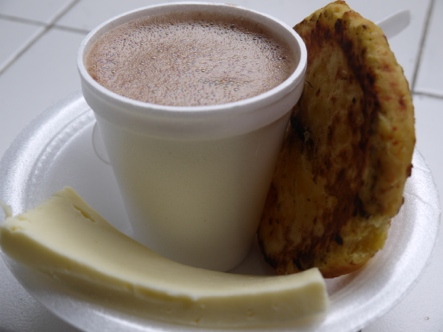 Jovian took advice from the garrulous owner on the best method for consuming his double dairy delight, and was told to dunk the cheese (but not for obvious reasons the fried corn snack called an arepa, that he’d ordered alongside it) into the chocolate. This didn’t seem to affect the taste – although he did attempt to dunk the arepa anyway, in the name of scientific impartiality – and was oddly impressed with the melding of sweet and sour flavours on that front.  It was only much later when he ordered the same drink in Ecuador that he realised the cheese actually has to be broken up and left to melt in the hot chocolate to get it to the ideal gooey consistency which the locals love. 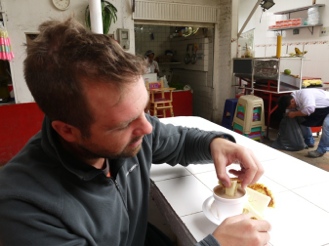 Jove finds it pleasing to be cheesing

True to form, around midday, Bogota’s weather took a turn for the worse so we legged it to the cable car, and back to our warm, cosy hostel to plot our next move to a hopefully warmer and drier part of the country. 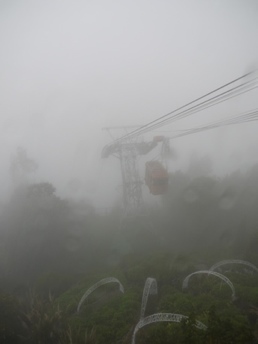 Not quite the views we’d hoped for

2 responses to “Day 142: Chocolate and cheese for breakfast”