Whilst we were in Nicaragua, Prawns for Breakfast brought you a pictorial round-up of our favourite street food and cheap eats across the country. It turned out to be a more diverse and exciting selection than we had anticipated. So, given that Colombia is better known for its extensive range of traditional dishes, we thought we´d skip the detailed blow-by-blow accounts of all the places we visited during our month there, and instead compile another mouthwatering menu reader.

Breakfasts are something of a hit-and-miss affair in Colombia: It generally takes the form of a fried ball or cake of corn washed down with tinto, sweetened instant coffee. Buñuelos (fried cheese dough balls) were very popular in Cartagena and the highlands, but they tended to be pretty greasy and were only pleasant to eat when fresh out of the fryer. A better morning repaste was the mighty arepa – a cornbread patty often stuffed with a variety of meat or cheese (and sometimes a quail egg). The best arepas were served at eateries lining the perimeter of food markets, and again needed to be wolfed down piping hot. It is madness to try dipping them in hot chocolate. But by far the craziest breakfast I have ever ordered (by mistake) was in a cafe in the southern town of Popoyán, where they served a combination of a fruit plate and a knickerbocker glory, covered in grated cheese. 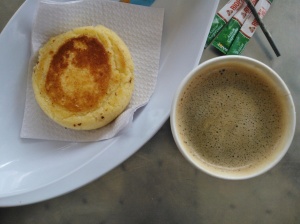 If you´re looking for some thirst-quenching bar action, Bogotá is undoubtedly the place to be. It is home to several hip new craft microbreweries, serving a discombobulating range of pale ales, wheat beers and porters. Our favourite brands were Las Tres Cordilleras and the insanely good BBC (Bogotá Beer Company – no relation of the public broadcaster). We particularly recommend the BBC´s IPA, now available in larger Colombian cities, and we very much hope they start exporting it to the UK soon. If fruit beer is your thing, just head to Calle 13 in the city’s ancient Candelaria quarter, which is lined by bohemian cafes playing loud rock and all declaring: “!Hay chicha!”. They serve this moreish fermented fruit juice in large coconut-style shells with straws, and you can while away a very pleasant few hours chatting to some local art students over a bowl or two (but one is really enough to share).

Lunch is where the real money’s at in Colombia. Sopa de Ajiaco is a rustic soup that hails from the capital´s region of Santafereño: it combines chicken with at least three kinds of potato and a leafy herb called guasca. It´s usally served with ubiquitous slices of avocado on the side, which you can just chuck right on in there, and it makes an exceptional but filling starter. Santa Rosa in the Zona Cafetera is famous for its chorizos: we sampled the spicy sausages at ChoriSant, which is famous for making the longest chorizo in the world. And then of course there´s the indomitable Bandeja Paisa, a country-style dish that we often used to order in a (now sadly closed) Colombian restaurant in Finsbury Park. Needless to say, the version we road-tested in Popayán, was in another league. The enormous earthenware platter easily served two, and was loaded with nine separate elements, including chorizo, avocado and arepa. All this cost just COP$ 25, 000 (US$ 13) – under half the price it was selling for back in the UK. The dish comes topped with fried eggs,  so you can legitimately order it for breakfast. 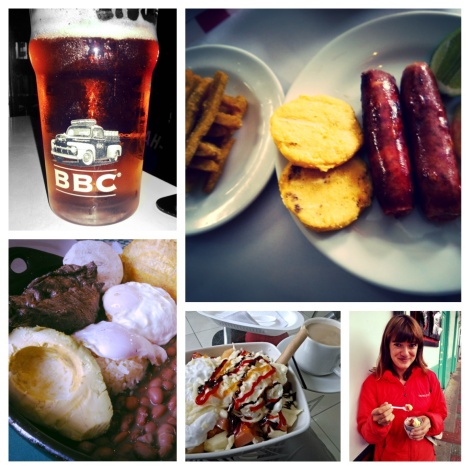