Whilst Bransby MacDonald-Williams and I were writing for The Inappropriate Show, we came up with a character (based on no-one we knew, clearly) on a perpetual culinary quest to sample weird ingredients or exotic dishes, because A.A. Gill or Giles Coren told him it was the thing to eat. The running gag was that he simply didn’t have the stomach for any of it, each scene inevitably ending with Adventurous Guy vommiting copiously over his dinner table, waiter and date, a la Monty Python’s Mr. Creosote. The last scene was set in one of those achingly trendy modern restaurants that serve tasting menus. The course that finally sends Adventurous Man over the edge is desert, a dish called Venus Lady Garden that took three days to prepare, and involves “strawberry blancmange, basil, Maiden’s Willow flowers which can only be picked at the full moon, and a single lamb’s testicle.”

But, alas, it is virtually impossible to parody modern life, because modern life has an irritating knack of being still more ridiculous. So it proved when in Lima – a burgeoning foodie capital – we decided to visit Malabar. It was Christmas, we were missing our friends and home comforts and had decided to treat ourselves. We had read up on the places to try Nuevo Andean cusine, for which Peru is justifiably becoming world-famous, and had drawn up a short list that included Rafael Osterling (who turns up on the list of 50 best Latin American restaurants) and Astrid & Gaston‘s Lima branch (which turns up on the list of the world’s 50 best). But, naturally, these places were all packed to the gills with the capital’s most discerning denizens, and there were no last-minute cancellations for gastro-wingers like us. However, we had also read great reviews of Pedro Schiaffino’s restaurant, which the helpful concierge attempting to make a booking for us coroborated. So off to Malabar in the, ahem, achingly trendy San Isidro district we duly went.

It has started well: all subdued lighting, subtle 70s decor, a jaw-droppingly wide selection of pouring spirits behind the bar, and a massive wooden fish above it. It instantly reminded me of Nuno Mendes’ Viajante, in East London. This should have sent warning signals: the tasting menu we rashly ordered there descended into farce when we were presented with a desert called Milk, that involved five types of, er, milk (most of which tasted off).

But we brushed this slightly queasy recollection to one side and ordered a drink we’d been imbibing quite a lot of in recent days, the legendary Pisco sour – essentially Peru´s national cocktail if you can have such a thing. They were phenomenally good, the sharp, citrussy notes of the Pisco and lime blending perfectly into the creamy egg white and sugar syrup. I enjoyed it so much I ordered an unknown entry on their cocktail list to follow, a Cholo fresco. This was an ambitious and heady combination of an aged Pisco with Campari (an herby spirit that turns up in the fashionable gin-based Negroni), the wine-based aperetif Dubonnet, and more lime and sugar syrup. It was garnished with a blackberry in a floating ice bowl, and had a fuity, bittersweet taste – something like a Bramble sour. It was darn refreshing, if not the best pisco-based drink I’ve tasted, and it left me salivating for the main event.

As soon as we were guided smoothly to our table by an oleaginous waiter, and handed our hard-back menus, we realised we were entirely out of our element. We would have trouble deciphering a menu of similarly posh nosh in a London restuarant: in a foreign language we had hardly mastered we would have no chance. How about Taidai de pescado con jugo de tumbo, mastuerzos y tobiko to start? Exactly. So, somewhat nervously given our natural reticence about tasting menus, we closed our culinary tomes and ordered a couple of Menu Degustacións.

As an amuse bouche (or perhaps, bocadito gracioso) we were presented with a small tray of stones, served with a typical side of aji (chilli salsa). The waiter solicitously cautioned us against eating the stones. For a moment, all sense and rationality disappeared. What should or should not we be eating? Eventually, we figured out the joke: four of the ‘stones’ were actually Peruvian new potatoes, painted to resemble pebbles. Amuse bouches are supposed to “offer a glimpse into the chef’s approach to the art of cuisine”. Quite how boiling potatoes (grown in more numbers in Peru than anywhere else in the world) and painting them grey was supposed to get our digestory juices flowing momentarily escaped us. But then we just gave into the hilarity of the culinary suggestion. Crack into an inedible stone! Oh, my.

Alongside the stones came a cover of pan, although to our bread-starved palates it was like manna from heaven. These were far more appealing: great steaming chunks of a rich, nutty, wholemeal loaf, popodums that tasted like sheets of caramel popcorn, and something resembling a burned sugar crisp. We fell upon it gannet-like and tried not to get crumbs everywhere. (They have a tool for disposing of them in places like these, but frankly when they use it, you feel like you’re eating in an residential home for the elderly).

The next five courses whisked past in outsize, beautifully rendered crockery. Two were partnered by glasses of wine, a Chardonnay and a Cabernert Sauvignon respectively, which we had also ordered blind as a pairing option on the tasting menu, for the same reasons we chose not to go a la carte. (Personally, I would have liked a third – perhaps a desert wine – but apparently you only got that treatment on the 12-course menu, and our wallets certainly weren’t stretching to that.) When you view the poor-quality photos I surreptitiously took below, please try to remember that the dishes are supposed to be really, really tiny. That`s the whole joy of the tasting menu experience: divest yourself of vast sums of money in order to feel like you’ve hardly eaten!

The first, vegetable course featured another Peruvian staple, chonta (organic palm hearts), paired with chestnuts. I`m pretty sure there was egg yolk and a bitter lemony fruit in there as well. The dish mainly tasted of seaweed. This was followed by a dish called 3000 m.s.n.m. (3000 feet above sea level), celebrating all the fantastic produce grown on God’s bountiful planet at this precise position. It included pulpo (doesn’t octopus usually reside at sea level?), which I couldn’t actually taste in this dish at all – and some egg-cress. The main texture was provided by a strange prickly fruit that had hardly any taste. We smiled wanly at our informative waiter when he collected the beautiful plates about 20 seconds after presenting them: two courses in things were starting to go horribly wrong again.

The second act of the performace was the strongest, as tends to be the case in our experience. A piece of baked paiche (an Amazonian fish) was seared to perfection in an addictive black aji, and escorted by a lonely but delicious sweet potato. The meat course consisted of slices of pink duck with piedras del camino. (Great: more road ingredients! I guess this was an obscure reference to the small piece of salty, hard cheese sitting in for the carbs.) The duck was fanned out beside a plummy purée, garnished with ribbons of a cabbagey vegetable, and drizzled in a reduction of its own juices. The combination of these different sweet and savoury flavours, hard and soft textures was stunning. After a overly dramatic but underwhelming opening, Señor Schiaffino was set to bow out on a triumphant finish. And then we got desert.

What can I say about this ridiculous creation? Firstly, it wasn’t pudding by a country mile. And secondly, much like our above experience of non-deserts at Viajante we simply couldn’t bring ourselves to east most of it (but at least on that occasion we possesed the lingual skills to send it back). The one identifiable element that could be realistically termed a desert ingredient was guanábana (soursop – a classic south American fruit a bit like a pineapple). The others included smoked calabaza (squash), an anise crumble (I can’t stand aniseed) and a sorbet that tasted exactly like petrol. Is that anyone’s idea of a good dining experience? Much like Adventurous Guy, I really felt like throwing up, and instead pushed the offending dish to one side. 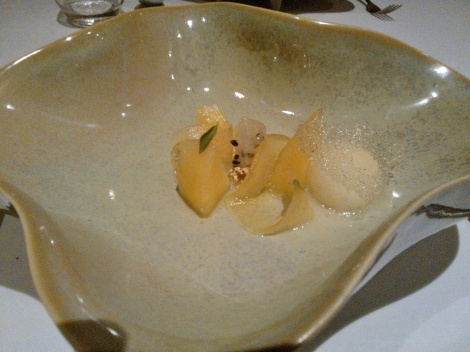 The menu promised dulcecitos (petit fours), but perhaps we only got them if we ordered (and paid extra for) coffee. Either way, we desperately needed a proper sweet treat to finish the night, so ordered a couple of glasses of the desert wine we had hoped for in the wine pairings . We drank them in stony silence, glowering at the neighbouring tables of local couples who had the nouse and words to order proper dishes that hadn’t been drowned in pretension. It was all a real shame (a really expensive shame), because the technical flare and creative vision evident in the ‘main’ dishes signalled a real intent to amaze, please and satsify in equal measures. In the end, we were simply amazed: that in a land of such seriously tasty produce, a talented chef decided to play it for laughs.