One of the culinary truisms we hold to in our travels across Latin America is that the freshest, tastiest food to be sampled is far away from the fancy parts of town, with their pressed tablecloths, buttoned down waiters and endearing piles of crap on the walls. The best bites – the absolutely freshest fish and seafood, sausages oozing with rich, herbaceous flavours, soups with spice that can make a grown man weep, intriguing street snacks and sugary delicacies – are all to be found in the humble mercado (food market) cheek by jowl up against the raw produce that went to make it.

Maybe this truism extends to many parts of the world. It doesn’t much in our home country to be honest, unless you’re honing in on our growing trend of upscale food markets, like London’s Borough market, or Mosely’s Farmers’ market in Birmingham. These foodie-magnets aside, the most exciting thing you’re going to taste on the UK’s high streets whilst you get your shoes re-heeled and buy a bowl of lemons is a pickled onion from the fried chicken stand nearby.

But markets in South America often show that it doesn’t have to be like this. Great food experiences can happen in the humblest surroundings: just pull a rickety stool up to a tiny counter from where exotic smells are emanating, forcefully introduce yourself (be warned: you will be anonymous to the point of invisibility) and plough right in.

Below are some of the pictures we felt best represented our own food market experiences in this continent, and some of the memories we kept from them.

Clare: The best bit about the market in San Gill were the endless rooms of fresh fruit stands, all offering a seemingly identical mix of rainbow-coloured fruits, most of which we had never seen before. Being able to order a bowl of freshly made fruit salad, albeit with weird toppings (grated white cheese and condensed milk anyone?) and eat it perched on a bar stool while people watching, was a particular highlight. Lurking at the back however, down a short flight of stairs, was the raw meat section. My overriding memory of this room was the awful stench that emanated from it. It’s not that the meat was bad, although it certainly wasn’t refrigerated, as is the norm in a lot of markets in this part of the world. But the smell of that much raw meat – whole carcasses, plucked chickens, steaks, chops and plenty of innards – all in one airless room, really turned my stomach and I had to escape back upstairs after one breath.

Jovian:  I always get a bit shy in markets as big and crazy as this: I don’t know how to ask to try the fruit I don’t know, so I probably miss out on some pretty incredible flavours. But you’ve just got to get stuck in. One of the craziest fruits we came across was called Guanabana – a sort of an unholy liaison between a pineapple and a watermelon. It was just huge. Eventually we managed to acquire enough produce to make a monster smoothie in our hostel the next morning. Our breakfast was another overwhelming experience. Not knowing the names for anything the guy sold, or how it came, I just stole glances at our fellow diners’ plates and pointed dumbly at different things on display. What turned up all tasted sensational so I guess that’s the best way to tackle these communication barriers.

Next day: Jovian made his smoothie from (top left image, clockwise from left) Granadilla (filled with seeds, like passion fruit), Tomate de Arbol (classic Colombian juice component – a cross between a tomato and a kiwi), Banana, Lulo (citrus based fruit, something like a lime) and Mango.

Jovian: We wanted to buy a whole bunch of vegetables to cook up a curry back at our hostel, and spent an eon checking out the produce on each stall before getting too involved. Once you even make eye contact, there’s no getting back out. A tiny old geezer – it was run by a father and son team I think – latched onto me as soon as I asked if he had any peppers, and started explaining how his peppers were all organic, no chemicals added, so much better for you, you couldn’t tell what crazy things went onto the supermarkets’ peppers. Once they went into my bag, I asked about squash and he started off on the same routine with that. We ended up buying an entire field of veg from that guy. But they do give you some fresh fruit as a gift, which is a nice touch.

Clare: After our lesson on organic farming from the crazy Colombian dude, we headed to the far section of the market square where a collection of food stalls had set up. It was pretty difficult to know which one to go for as they all seemed to be offering the same food – grilled meat, sausages, potatoes that were boiled then fried in meat fat, plus cauldrons of steaming soups. In the end, we plumped for the one that looked the busiest and sat down at a rickety table, surrounded by wild dogs. As there was no menu, it was pretty difficult to order but our helpful waitress took us up the counter where we could point and ask questions. Jovian had been obsessed about the sausages ever since he glimpsed them on the grill so he went for a mixture of three different kinds and I had a hearty soup. The Colombians really know how to make a good soup and this was a meal in itself, with different kinds of native potatoes, beans, meat and plenty of herbs – delicious. 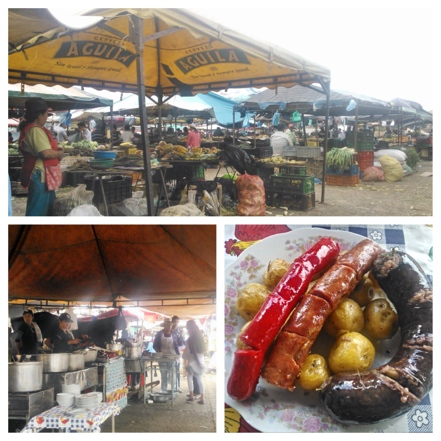 Clare: I’m afraid I can’t offer many positive memories of the food markets in Quito as I’d been struck down by the lurgy, though a minor bout in comparison to our experiences in Mexico. But like a dedicated wife, I accompanied Jovian to three markets whilst my stomach inwardly churned. Quitenos love their offal and that’s never been my favourite part of an animal, so I doubt even if I was fighting fit that I would have ordered the tripe stew or soup with pig’s blood, though I’m sure I could have been tempted by the sugary pristiños – a fried dumping-type snack for Christmas drenched in a fig and honey syrup – if my stomach had been willing.

Jovian: It was a shame Clare was so ill in Quito, because she missed out on some cracking dishes here. Yaguarlocro – the classic Ecuadorian soup we tried in Quito’s central market – really stood out. It’s traditionally served up with avocado, fried pig’s blood and pebre – a chilli salsa with tomato, onion and coriander. The mix of flavours and textures in one bowl was incredible. And the street food stalls down at Floresta were one of the most exciting open air markets I have ever been too – they were literally camped out on a huge roundabout, surrounded by lanes of filthy traffic, but as night fell the smoke and fire from their grills entranced me. I spent a ridiculous amount of time checking out each stall to order the perfect combination of tripe and sausages, before carrying my prize possession on our long walk home, steaming in a plastic tub. I remember Clare looked pretty fed up by the time I’d made my choice. It cost about US$3.50 I think, and was beyond a doubt the best thing I tasted in Quito.

Jovian: What can I say about the plate of fish and chips I had in Valdivia? It was the closest thing to the taste of home we’d had on this trip so far. It went really well with a cold pint of the local draft beer too. They served their fish in epic portions. I really wish I could have finished mine, but there was just too much of it on the plate. The chunky fillet tasted so good in its crisp batter though, so I got them to put it in a doggy-bag and stuck it in a roll for the bus ride to Pucon the next day. It was just as good cold, a day later. If you visit Valdivia, you have to check out this incredible market.

Clare: The market in Valdivia had a pretty impressive selection of fresh fish, all stacked up on piles of ice. Imposing matriarchs sat in front of their wares on tiny stools, wielding Blue Peter-esque homemade fly swatters made of twigs and leaves that they wafted over the fish, some more thoroughly than others. It was pretty cool to see congrio (conger eel – a Chilean delicacy), hake, salmon and lots of things in shells all lined up. Unfortunately, as most stands were covered with a red cloth the fish reflected this colour in the light, so the pictures I got on my camera don’t really do it justice. On the other side of the fish was the fruit section where we got a huge punnet of fresh blueberries for about US$2 and devoured it that afternoon. Looking at the empty tub we realised just how starved of fresh fruit we’d been in Chile. 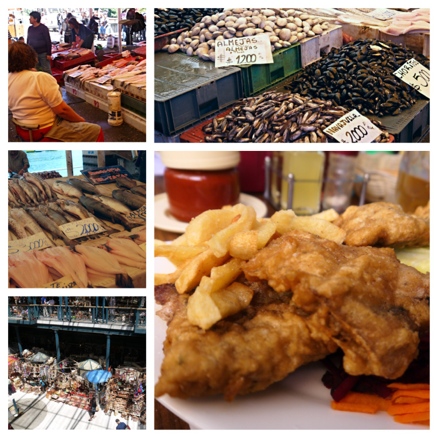