As we have mentioned in previous dispatches, your PFB correspondents are not vegetarians by a country mile. There are some properly farmed meat products – a thick wedge of bife de chorizo, a slightly sweet morcilla sauasage, or of course some succulent spit-roasted lamb – that are just too good to resist.

But we also believe that it’s simply not sustainable to eat as much meat as we carnivores tend to do, and that there’s a world of healthy, delicious veggie food that is very much worth diving headlong into, if you are willing to take the time and effort. For that reason, at home we try to stick to a Meat-Free Monday habit, and it’s definitely helped us explore some really great grub (Szechuan cuisine lends itself particularly well to the vegetarian diet). There’s absolutely a case for meat being the treat rather than the norm when we get back to the UK.

However, being a full-time vegetarian on the road is another matter entirely. So many of the backpackers we have met on this trip said they were meat-free, or nearly entirely so, at home. But by and large – either because of a lack of availability of vegetarian cheap eats, or a lack of understanding of what vegetariaism is – they ended up including a bit of carne in the mix whilst in Latin America.

Despite these reservations, at the beginning of February, when we had arrived in the Chilean tourist haven of Pucón, sitting on the shores of Lake Caburgua and overshadowed by the mighty Villarrica volcano, we agreed to attempt two things. First, Jovian decided to do his normal January detox a month later (February is so the new January darling – plus as our travelling buddy Tiffany reminded us, it has less days in it), and second we both agreed to avoid meat at all costs. This was easier than it seemed, because we had a stable base from which we could try to resist temptation for that month: we were volunteering at siempreverde, an eco-store in the bustling centre of Pucón (the first in Chile), and living in a tiny wood cabin in the hills outside town. Pucón also boasts a number of veggie, or veggie-friendly restaurants such as the eco-hostel ¡école!, whose secret recipe bread served with every meal is the bomb.

To start with this seemed like a badly misguided challenge: one of our first outings as a group of volunteers with our host, Tracy, was to visit a festival dedicated to roast lamb in all its glory. The smell of hunks of slowly roasting lamb wafting from barbecue pits set up around the field we were in, and the sight of locals sitting down to a big old portion of it washed down with a fat Chilean red, almost caused us to drop our good intentions on Day 2.

But we are stronger than that, and we persevered. We and the other WWOOFERS (Willing/Worldwide Workers On Organic Farms: does this acronym work for you? It looks a little tipsy to me) – Sam, Alison, Sara and Claire – worked hard, played hard, and in our days off we visited hot springs and hiked round the incredible hillsides around Los Nevados. In the evenings, while none of the group was currently vegetarian, we all took turns to cook up some pretty delicious veggie dishes from scratch in our tiny kitchen. As Sam said later, we totally bonded over a love of well-made food.

On the Cinco Cascadas trek near our home in Los Nevados

Your correspondents, relaxing in front of Volcano Villarrica

In the end, we found that being veggie in Pucón was easier than it sounded: we had access to a huge variety of fresh produce, leaves and herbs, and were happy to take the time to test and improve our favourite recipes over a beer or two (well, that is apart from Clare and me). As a result, over the month we came up with a decent set of delicious, healthy, group-cooking classics – sweet and savoury breads, multi-coloured salads, hearty mains and even the odd gluten-free cake which we called the ‘WWOOFER Cookbook’.

We wanted to share what we’d created with the next set of volunteers in the cabin. But we also thought that, (with a few adjustments given that some of the ingredients wouldn’t be so easily found on the road), travellers could also recreate many of the recipes in their own hostel kitchens, to break up the monotony of either eating more Menu Del Dia, or cooking up another classic tomato pasta.

Even though this isn’t a recipe blog, we’ve included my patented recipe for a meat-free lasagne, as a humble example. To use the other ones shown below, or to add your own veggie creations, please contact us and we will happily share the WWOOFER Cookbook with you as an editable Google doc. 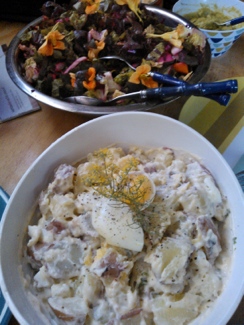 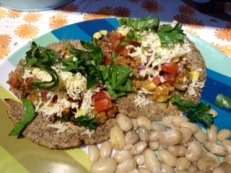 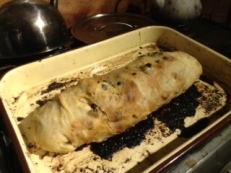 Serves: 6 hungry WWOOFERS, with some leftover for lunch

Large passata jar of soy meat (I know soy meat doesn’t come in a pasata jar but it was already decanted when I used it. If you are worries about how much you’re using, use more)

4 packets of tomato salsa, or 2 packets and 4 large tomatoes, chopped

4-6 cloves of garlic, finely diced, plus more to scatter on some bread

4-6 carrots, depending on size, finely chopped

½ a big block of light cheese, the type with holes in it

Powdered merken (or any kind of smoked chilli powder)

A big handful of fresh basil leaves, chopped, and some to decorate (or 4 tsps of dried basil if you can get that)