Machu Picchu had been on our list of travelling must dos for some time. Well, more specifically, my list. Jovian, for once, had been the slightly more cynical partner on this occasion and was not convinced it would live up to the hype. After all, back at the beginning of our trip we’d overdosed on Aztec ruins in Mexico. And in Guatemala, we’d had Tikal’s towering temples and their steamy jungle surrounds practically all to ourselves. Would the work of the Incas, the last of the big pre-Colombian civilisations of our trip, measure up to their peers?

Our visit to Machu Picchu had also been a long time coming. Originally we’d planned to be in Cusco – the city that’s the jumping off point for trips to the ruins, in October – just before the rainy season in the Andes. We made it in April…just six months later than planned. In the interim, we’d met a lot of people who’d been to Machu Picchu and raved about their experiences, saying it was one of the highlights of their trip. I was conscious there was a lot riding on this, and at $50 for the entrance ticket plus the $60 train journey, (there’s no road access to the site, meaning that these are some of the most expensive train tickets in the world by distance), it was a budget breaker. 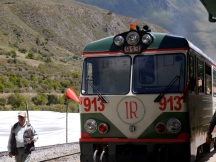 Our trusty train arrives in the station 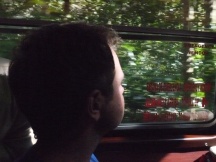 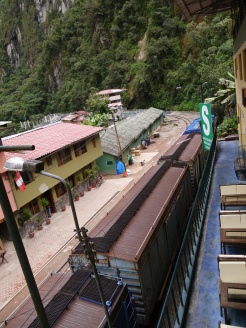 Our over-priced train journey was booked with Inca Rail, the slightly cheaper of the two operators, and – unlike its rival, the Orient Express owned Peru Rail –  it’s in Peruvian hands, so our money was staying in the country. We’d been looking forward to taking a train for some time, having failed to in Ecuador, Chile and Bolivia, and it was pretty cool to be on the rattly, narrow gauge line as it slowly made its way along the river valley. As we supped on our free drinks and ate our complimentary packets of fruit and nuts (at these prices they had to provide some freebies) we watched the snippets of Inca terracing flash past through the window as the train gradually neared its destination, Aguas Calientes, the nearest town to the ruins and where we’d be staying the night.

At 4am the next morning, we dragged ourselves out of bed to join hundreds of other travellers avoiding the extortionate charges for the shuttle bus and began the epic hike. The walk to the site entrance, which for some unfathomable reason, everyone felt obliged to take at a military pace despite the altitude, was six kilometres long, winding 400 metres up a flight of steep steps built into the mountainside. Climbing initially by torchlight, and then through fine morning drizzle as the clouds cleared, we were shattered by the time we reached the top, but seeing the mountainous surrounds gradually appear through the misty dawn light was definitely an experience we won’t forget. 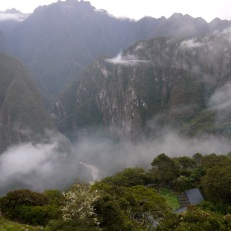 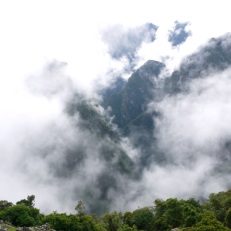 My body wasn’t quite so happy about the experience I’d just put it through. Not knowing if it was hot, cold, or just exhausted, I didn’t feel good after our rapid ascent (we’d done the climb in just over an hour) so we escaped the crowds and perched on a rock for a much needed pit stop. Luckily, Jovian had thoughtfully prepared protein packed sarnies of egg and avocado, our current favourite DIY breakfast, which we inhaled. My legs gradually stopped shaking and I finally felt able to take in the incredible scenery.

And that’s just what we did for the next six hours. One of our favourite things about Machu Picchu was simply sitting and admiring the views from different parts of the site, pondering how Incas got all the stones up the steep mountainside, admiring the neatly carved drainage channels and occasionally tuning into snippets of spiel from the tour guides ushering their charges around the site at breakneck speed. Apart from a brief trek to to visit the precariously positioned Inca Bridge, where Jovian temporarily lost it as he stared down the sheer mountainside to the ground hundreds of metres below, we had a pretty relaxing morning.

By midday, day trippers were starting to arrive in earnest and we were starting to tire. We headed back down the mountain, a much easier journey now we weren’t fighting the altitude, and back into Aguas Calientes to roll back into bed for some much needed rest. 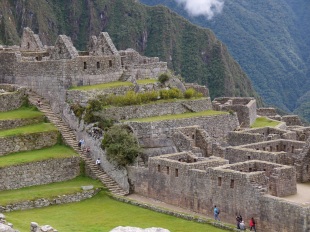 Before the arrival tour groups, Machu Picchu was a relatively quite place

The morning’s clouds didn’t quite disappear 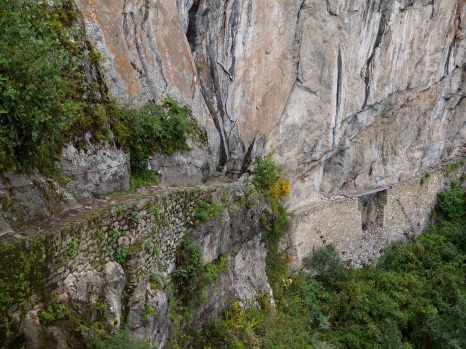 So was it all worth it? We’d argue yes. You can’t deny that Machu Picchu is expensive but it’s situated in one of the most stunning locations we’d been in on our trip and so well preserved so you could almost imagine whatever it was the Incas were doing there all those years ago. Even Jovian’s initial mis-givings melted away when he saw the views. A large part of the cost was getting there but for us taking the train was part of the experience, and something our inner geeks had been really looking forward to doing. All in all, one of the purported wonders of the modern world gets two thumbs up from Prawns for Breakfast.