Peru. It’s a massive, mixed-up, white-kuckle thrill-ride of a country. And so is its food.

As a foodie, it’s impossible not to get excited about what’s going on on a Peruvian’s plate: there’s just so much mouth-watering grub to choose from. This is often said to be thanks to the three geographical zones that Peru sprawls decadently across: its vast stretches of sometimes arid coast-line, the rugged and time-warped highlands, and of course its phenomenal swathe of Amazonian jungle. They all conspire to make Peru a unique culinary melting pot – from the world-renowned ceviche or cebiche (variations on the theme of cured fish exist in many countries for sure, but ceviche has a distinctively Peruvian simplicity and harmony) to to the notorious cuy. Ok, it’s time to get over yourselves, cute n fluffy animal lovers: Peruvians have been eating guinea pigs for a lot longer than you’ve been keeping them as pets. For the record, it’s a tangy but pretty unrewarding meat. I’ve tried cuy two ways, the way you see it on all the tourist menus in a decent parilla in Ayacucho (below), and chopped up in a rich stew as part of a buffet in Chivay. I much preferred it the second way. 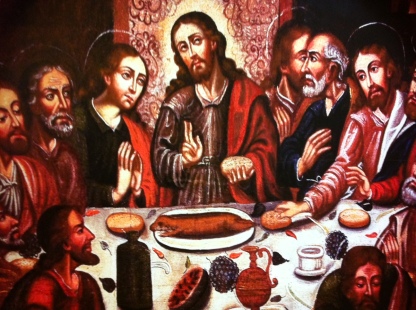 Jesus puts a surprise special on for the disciples

Peruvians today work as their forefathers did with simple rustic ingredients as the base to many dishes: potatoes – 3, 000 frikkin’ varieties of them, which Clare will talk about in her next post – choclo (corn), quinoa (Marks and Sparks food lovers: this is where it comes from) and of course the yellow and red aji (chilli peppers) that spice up various salsas and ceviches. And yet it’s hard to think of another cuisine (with the possible exception of Japanese food, with which it is often fused) that offers such a varied and eclectic range of flavours and textures. In the six or so weeks we traveled across Peru, we probably sampled a quarter of its famous dishes and drinks. And we tried hard. Most say the best place to try to taste it all is Lima, Peru’s gastronomic as well as constitutional capital, but you can certainly find it all in a smaller circumference and at just the same level of quality in historic Cusco.

Not surprising, then, that Peruvian cuisine is fast becoming an internationally accepted cuisine, second only to Mexican food in terms of culinary exports from Latin America. Its modern incarnation takes the Inca staples we mention above and adds in numerous elements poached from immigrant cuisines – Spanish influences like milk-based deserts abound of course, but Asian, African, French and British derivations feature too. Lomo Saltado, for instance, possibly the most famous Peruvian main course, is stir-fried pork, onion and peppers, as Chinese as it gets. And a number of globally acclaimed chefs like Emmanuel Villeran, Virgilio Martinez and Gastón Acurio have raised this harmonious blend of simple fare and peregrinacious experimentation to another level. It’s called Neo-Andean or Novo Andina food, and it doesn’t all work. But when it does, it’s a magical experience.

So what would a normal day of eating in Peru bring? Breakfast is often a hearty soup or stew, like Caldo de Gallina, with a boiled egg bobbing about in the rich chicken broth like a clever chef’s pun. Trendy cafes happily serve more continental fare these days, and a mixed pepper omelette sets you up well for some Inca ruin sightseeing. But for me the farmhouse bacon and eggs at + Restaurant overlooking Cusco’s Plaza de Armas is the one to beat. Lunch is the main event: a solid, three (or four) course belt-buster of a session usually involving another soup, a causa (potato cake often stuffed with chicken and egg) or Papa a la Huancaina, with a thick sauce of yellow aji and cheese layered over boiled potatoes. Your main might be Lomo Saltado, Aji de Gallina (shredded chicken combined with breadcrumbs, nuts and chillies) or Tacu Tacu (delicately seasoned, er, rice and beans).

Out on the street, grab a papa relleno (fried potato – again – stuffed with meat or cheese) or anticuchos (beaf hearts on a skewer, potato on top just to remind you who’s king of the culinary kingdom round ‘ere). Peruvians don’t really go in for dinner, but if you want to dine out in style, you could sample Rocoto Relleno (peppers stuffed with meat and topped with cheese) as a starter, before moving on an Alpaca Stroganoff, as we did at Zingaro in Arequipa. Perhaps melt-in-the-mouth Salmis de Lomo (tenderloin of beef with a black mushroom and red wine reduction and fettucini) at the Treehouse restaurant in Aguas Calientes near Machu Picchu would be more your thing. Or check out another new opening for Acurio in Lima, Papacho’s – a trendy dirtyburger joint specialising in veal patties topped with a whole host of locally sourced ingredients and intriguing sauces like rocoto, elderberry ketchup and a violently green utacuta salsa. It wouldn’t look out of place in London’s Dalston.

Still got room for desert? How about a chocolate torte layered with mousse of lúcuma (a sub-tropical fruit tasting of maple and sweet potato)? The best meal I ever had in Peru was the polar opposite of  fancy restaurant grub though. It was Pachamanca: classic peasant fare of lamb, broad beans and (of course) potatoes, baked to perfection in an oven dug in the ground, and shared with us freely when hiking through Huancavelica by a welcoming group of partying Peruvians.

I wish I could do elegiac justice to this cornucopia of great platters, but as always, you are best off feasting on the photos.