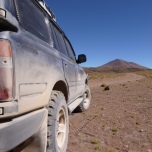 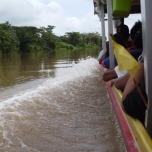 We started our trip on 10 July 2013, with a relatively simple plan: starting in LA, get as far as we can from the top of Mexico overland / sea, via any method available, until we get to the very tip of South America. But the best laid plans of prawns and men often go down the khazi. By the time we got to Lima, we realised we were due to hit up most of Peru and Bolivia during their rainy season, and by the time we would have gotten to Patagonia, the weather there would be turning from half-decent to dismal.

So, after much debate about the pros and cons of abandoning the straight-overland plan, we decided to fly to Puerto Williams via Punta Arenas in late December, and explore the region during the height of their summer. Then we would turn around, and head back north by boat and bus.

UPDATE JUN ´14: South America routemap has been completed! As of our 300th day on the road (06 May 2014), we returned to Lima and officially completed our mission!

One response to “The route”