We are standing in the austerely framed Plaza de Armas in the centre of Lima, simultaneously trying to unfurl handwritten banners in a stiff breeze, find appropriately colonial facades to backdrop our photo session (the ostentatious but unvisitable Presidential palace and Cathedral are the only likely candidates), answer some Peruvian students’ survey about our jewellery shopping habits (I find I don’t know much about mine), and convince some excited members of the Presidential guard that said banners are not in fact demanding the downfall of Ollanta Humala’s government but stating how many tacos and empanadas we have eaten over the last 300 days on the road (76 and 96 respectively). 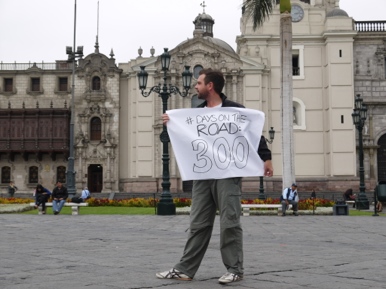 We fail to raise more than a weak smile when we earnestly translate these frankly ludicrous messages, but a tourist police officer overhearing our inquisition does involve us in an animated discussion about famous British dishes. Despite the confusion that rains around us on this bleak winter’s morning in Peru, I am having a very good day. And for good reason: we (or more accurately I) are celebrating the achievement of Prawns For Breakfast‘s mission: to travel the length of mainland Latin America by land and sea.

When we were here last over Christmas we had to abandon the original plan – to start at the most northernly point (Tijuana, Mexico) and end at the most southerly (Puerto Williams, Chile) without taking a single flight – because we had not foreseen just how inhospitably wet this continent could be. Despite this set-back, the mission has been completed in the technical sense – we made a difficult decision to take flights to the end of the world and flipped the route round. Since then we have thrown ourselves and our backpacks off and on ferries, buses, trains, jeeps and tuk tuks to get back to Lima. But mainly, it must be said, buses.

Clare isn’t really celebrating this achievement, she’s pretty much humouring me because I have pursued this goal with borderline obsession since we crossed the Mexican border (by bus). Clare would have taken a flight in a heartbeat if it meant we could pay just a little bit more to get from A to B more directly and in much less time. And, in fairness, in many parts of Colombia you can do exactly that. I try to explain to her what I’m about to explain to you, and she gets this far-away look in her eye and starts playing with her split ends. But she loves me for the idiot I am, and this is why today she’s holding aloft a homemade banner celebrating the consumption of a vast amount of Latin American street food, even though we might shortly be arrested for this lunatic stunt.

Me, I hate flying. It is the epitome of technical development championing over personal experience, this willingness to divorce yourself from reality and strap yourself into an airless cylinder filled with death references, just to get somewhere faster. And ‘fast’ is of course a flexible concept with this experience: because there is almost nothing (save perhaps a good film) one wants to remember about the actual journey, one’s memories are entirely of the interminable waiting and myriad inconveniences of the airport terminal, where huge amounts of energy are expended in convincing you that waiting can be a pleasurable activity. Let’s not bother talking about the quality and cost of airport food: you can’t even score a decent taco.

But what pains me most about flying is the lack of perspective it affords the traveller. As flying is concerned by definition with land-avoidance, you are only ever far from the things you pass. Once finally wedged into your (by default, extremely uncomfortable) seat, you may, if you are lucky be able to lean over the sweaty, bulging form of your next-door neighbour to obtain an oblique view of the city you are leaving as it rapidly pans out of sight. If you are leaving an island, you may also temporarily be able to stare at a large body of water, until the clouds engulf you.

In general however, you will be departing at 3.30 am, only be able to see the city’s twinkling lights, unable to recline more than ten degrees and feel like death warmed up. Shorn of perspective and robbed of location, the air traveller can only appreciate the empty fringe benefits of flying (air miles being the most meaningless of these) and concentrate her thoughts with grim determination on the place to which she is being transported.

Travel – real travel – is not simply about where you get to, it is about how you got there. From my bus window seat (when Clare lets me have it) I too see things from afar: Mordor-like mountains looming menacingly above whilst the bus follows a river’s capricious course into the darkening distance, an undulating Andean valley of such expanse that the animals and farmers take on that surreal model-sized plasticity, and an endlessly unfurling blanket of desert punctured only by God’s strangest plants, cacti. I see these things, and I feel grateful that I am a small speck on my infinitely surprising planet.

But I also get to see things that are near. Busing into a city in Latin America is an extremely instructive process, which is of course avoided by the intercity air traveller whose destination airport has been built in a smart neighbourhood. Bus terminals are built in places where poverty – absolute, not relative – lives. I see men drinking silently outside half-built houses, their construction poles reaching into the smog-filled sky, offering silent orisons for their completion. I see dirty-faced children pulling toy cars around in the rubble lining their streets. I see a young woman sitting alone in an abandoned caravan in the middle of an empty parking lot. I have seen all these things, and I am grateful for this perspective too.

Long distance bus travel – and I mean upwards of 12 hours here – can be painful and exhausting: I will not pretend otherwise. There were many moments I felt like giving up the mission and taking a flight somewhere, anywhere just to avoid the terrible C-list movies, grating cumbia music and endless damned lies (yes, there will be a bathroom on your bus; no, of course it won’t be locked; yes, the bus will stop regularly when you find that it is). But then we were searching for a challenge when we gave up our easy London lives, and travel is simply more fun when challenges are endured and surmounted. Looking back, I wouldn’t have wanted to do my 300 days any differently, mistranslated directions and missing clothing notwithstanding. Come fly with me, let’s float down to Peru? You can keep your air miles Frankie, I’m taking the bus.