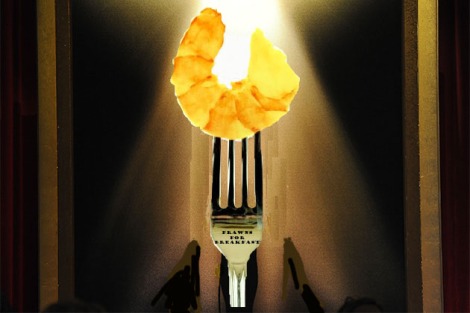 The nominations are in. The judges have deliberated, cogitated and burped heavily. It’s the post you’ve all been waiting for, where we reveal the first ever winners of a soon-to-be-prestigious Golden Prawn. Drum roll please … for the Prawns For Breakfast Latin American Awards 2014!

There were a few contenders for this award and we decided to whittle down the list of offenders to the hostels that were so bad we had to check out of them asap. Ummagumma in Antigua may have had a roof top kitchen and bar overlooking the city but it was overrun with cockroaches. Running between plates, over tables and even in our bed (I had the treat of waking up to a dead cockroach in my pyjama top), they saw us scuttling off the premises quick sharp that morning. Hostel Alegria promised warm beds and a friendly welcome in Bogota. What they didn’t tell us was that the beds were crammed together so tightly a hobbit would have trouble turning in for the night. The mattresses had a peculiar habit of sliding off the bed in the middle of the night, as Jovian found out to his discomfort as he was dislodged from his top bunk at 3 am, and the cosy welcome was so cosy that it involved 20 people trying to cook and eat in a kitchen big enough for five. Congratulations, Ummagumma and Alegria: for contriving to make our stay the least comfortable in ten months on the road, you can jointly nibble on our Golden Prawn. CR

Tacos are by far Mexico’s best street food and fish tacos are by far the best type of tacos. These juicy babies combined freshly caught fish, fried in a light batter, with a seasoned cabbage slaw, tomato salsa and coriander. We wolfed them down watching the waves crash down onto Zicatela beach as the sun set in Puerto Escondido on Mexico’s pacific coast. We’d just battled a bad case of Montezuma’s revenge and this plate of tacos washed down with a quintessentially Mexican michelada (beer, salt, lime and chilli), served at the excellently monikered Fish Tacos & Beer, were just what the doctor ordered.

Salteñas are Bolivia’s answer to empanadas, the meat-filled pastry parcels found almost everywhere across South America. We’d sampled many types of empanadas on our travels, from the big to the small, from the freshly-cooked fluffy ones to the dried-up-from-spending-too-long-on-a-hot-plate ones. After hearing rave reviews about Bolivia’s salteñas we couldn’t wait to get involved. Our first and favourite sampling was at Restaurante Malpartidas, in chilly Potosi high up in the Andes. This restaurant sold salteñas from its front porch and even before we’d even reached the front door it had enticed us in with its aromas of freshly baked pies and the rather cheesy fake MacDonald’s ‘M’ over the door. These salteñas just pipped the fish tacos to first place thanks to their spicy, savoury yet intriguingly sweet fillings and perfectly cooked pastry shells. CR 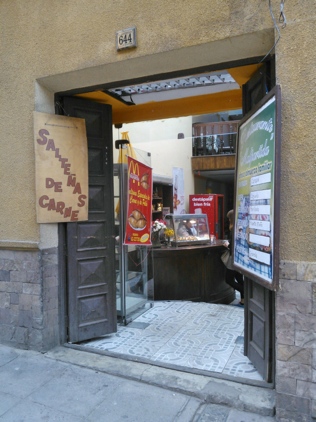 Just as the Best Breakfast category (in our next post) was a tight field, so it was with the worst. So many grim memories abound of cheap white rolls, overly sugary and seemingly fruit-free jam and tepid Nescafé in hostels across South America. The owners often provided these insipid meals free to incentivise bookings, but they were usually a false economy. By staying either in bed and breakfasts aimed at tourists from that country or by arranging family homestays, we often found you can eat like a local and enjoy a proper start to the day, whereas in ‘party traveller’ accommodation or bigger backpacker hostels you tend to pay well over the odds for noisy locations, ropey beds, and terrible breakfasts. The worst example has to be the Adventure Brew Hostel in La Paz. Their free ‘breakfast’ offer was to whip up some cheap pancake mix at 8 am, and leave out a tray of these soggy sadboys all morning, alongside a jug of equally stone-cold coffee. A microwave was helpfully provided so guests could warm up this sorry muck for themselves, although they failed to point out that if you try to heat coffee and milk together, it will explode. And what sort of hostel doesn’t even bother to serve hot coffee in the first place?

If you ever get stuck in Loja, Ecuador, try not to take it too personally. The residents of Loja are not ‘taking you for a ride’, or against travellers per se. They are just enduring pretty grim lives, and they don’t see why you shouldn’t feel their pain for just a short while. That said, their breakfasts are enough to drive the most philosophical backpacker either to a) the nearest bathroom or b) drink. The clear winner by a country mile in this category, breakfast at a local café in Loja consisted of tasteless papaya juice, really horrible instant coffee served with far too much evaporated milk (any evaporated milk being too much in coffee as you will agree if you try it), the cheapest, pinkest sausage it is possible to reclaim mechanically, stale bread, a greasy egg and ice-cold service. Utterly disgusting: avoid at all costs. JS

As we’ve explained, trying to show you guys the best plates we’ve sampled in their true colours has been pretty difficult without the help of a fancy photographer and a stylist to make our dishes look as tasty as they really were. We asked you to tell us which image really summed up the inability of our Nokia 710 to take a picture of anything even bordering on decent. Well, we’re pleased to tell you the results are in…

These two shots had you rushing for the sick bucket in equal measures. You loved the way the phone’s camera had really picked out the luminous, fatty quality of the mayonnaise slathered over the churasco sandwich and made the meat look a truly unappetising shade of grey. Similarly, you salivated over the way the pulpo managed to bear more than a passing resemblance to a cheap biriyani and appreciated the way it had really picked up the glossy fatty sheen on the chips.

In the end there was no serious competition for the winner’s gong in this category. A whopping 38% of you voted for Oaxacan Mole Negro, aka an indistinguishable tar-like sea making its way over what the viewer can only presume is chicken, but let’s face it, could just as easily be a piece of roadkill, is a true horror, even by Nokia’s technically limited standards. We sincerely apologise if we put anyone off their dinner and would like to thank all our readers for their patience and understanding. The food genuinely tasted good – honest. CR

From the video depicting classic young love on the run in leather jackets and bandanas to the epochal synth chords hammering their way through the track, Los Prisioneros and their lead singer Jorge Gonzales – Chile’s own ‘voice of the 80s’ – were taking no prisoners with this overwrought electronic lament at the heart’s betrayal. A compelling combination of subtle anti-Pinochet messaging, willingness to eschew the popular folk music of the previous generation and a warm embrace of the Casio keyboard resonated with disaffected Chilean youth everywhere, and ensured maximum airtime on radio stations and music television channels across the country and in Peru.  When a tousle-haired, Spanish guitar-wielding Gonzalez spat “Words are knives / When they control pride and passion”, Latin America had found its answer to Duran Duran. The song has more than stood the test of time, and your eighties-enamoured correspondents were hooked on the first listen.

There was little doubt which Latin American artist would swipe the Golden Prawn for musical omnipresence in 2014. Things had gone quiet in recent years for Marco Antonio Muñiz, having successfully crossed over into musical mainstream following underground collaborations with L’il Louis Vega and Todd Terry. But in late 2013 Marc Anthony, as he is better known, teamed up with long-time producer Sergio George to launch his triumphant comeback. The result was ‘Vivir mi Vida’, a Spanish adaptation of Khaled’s ‘C’est la Vie’ that spent 17 incessant weeks at the number 1 slot in Billboard’s Hot Latin Songs chart. From that moment on, you could not enter a restaurant, bar, café or even bus terminal from Puebla to Punta Arenas without hearing or seeing the Billboard 2014 Latin American Artist of the Year proclaiming his intention to get down. It was an infuriatingly catchy career masterstroke: Muñiz simultaneously delivering a joyous manifesto for self-determinism to the vibrant strains of samba-soaked backing track whilst flipping the bird to his ‘hataz’ (including recently divorced Jennifer Lopez, with whom he had very publicly lost an acrimonious child custody battle). Altogether now: “Voy a reir, voy a bailar / Vivir mi vida, la la la la laaaaaa”. Take that, Ricky Martin. JS